So I went personally to the estate sale my mom bought me the Conn 444N Clarinet at. (amongst a book by Bonade, a Conn Bugle, an IDRS program, and some records, amongst some other stuff)
Most of the stuff was sold already (including both an Oboe and a nice looking Pan-Am Alto, both of which were already sold on the first day.)
But this flute was still there under some sheet music in a bin, probably because of a crack in it.
Has 5 keys (technically 6 but two activate the same tone hole)
Keys are set into extensions from the wood, mainly which is why I came to that date.
I'll take pictures when I get home.
Seems like it's worth the $20 I spent on it.
EDIT: I hate USB cords.
Last edited: Aug 27, 2016

Aha!
Found what looks like the same makers' mark on a Clarinet on ebay, construction appears rather similar also:
http://www.ebay.com/itm/Antique-W-N...et-with-Nickel-Keys-wood-ISI600-/302103918084
The Linz makes sense, as I was assuming it from it saying L..Z it was Leipzig.
The H in that looks like it could be a W, also.
I also apparently am rather unreliable at actually posting pictures when I say I will. =P
Last edited: Oct 15, 2016

Staff member
Administrator
You might want to check out http://www.landesmuseum.at/de. I did some Googling regarding flutes from Linz, which got me to a Galpin Society article that mentions this museum. Hey, it's something.

FWIW, the only maker from Linz that I see with any regularity in Google is Eduard Heidegger. Here's one of his flutes on eBay.
Yes, I'm the Artist Formerly Known as Saxpics.
If you need me or just want to chat, e-mail me @ thesaxinfo-at-gmail.com.
Check out the Bassic Sax + TheSaxInfo Picture Galleries!
Quote of the Day: "It sounds like a psychotic kazoo." - Claude 013

An update, 2ish years later:
I'v researched this some more since then, and have this:
Its definitely German, not Austrian.
I can't read it very well still, but I'm not sure the first letter in the 2nd line is an L, but Leipzig makes sense, considering about halfway through a letter looks like a Z, and it looks like early 19th century flutes from Dresden and Leipzig. The first letter on the first line is definitely an H or a K, though.
Also, it looks extremely like this flute:
http://www.originalflutes.com/german-flutes/anon-6-key-flute.html
Not exact, but at least very similar.

Don't think I ever sent any of the pictures I took, these are from like a year ago but still about the best I can do probably, it's really hard to see the logo.
I'll take a few brighter looking pictures tomorrow though, along with a good picture of the headjoint. 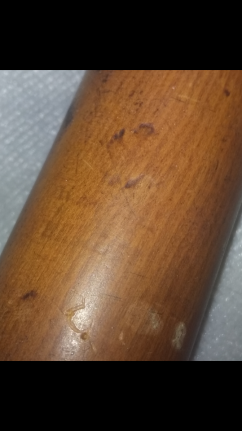 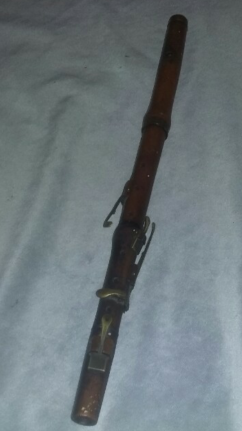 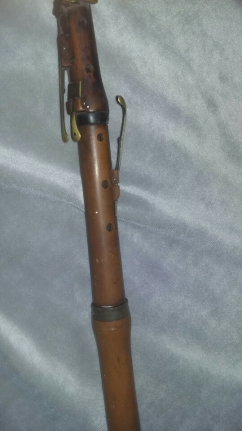 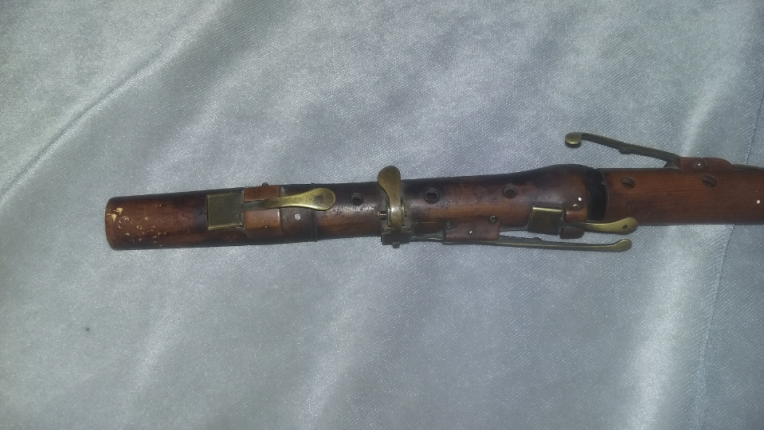