OK... newbie question here, so go easy. I'm refurbishing an old wood Martin-Freres bass clarinet and it's in great shape mechanically except the bell had a bad dent and the floor peg holder had snapped off and was missing. So I found a good deal on a Kessler bell with floor peg. Just tried it out and the tenon is a perfect fit but... the tone hole is a good deal smaller. Yup... I should have asked for dimensions. So... how bad do you think it would be to implement a smaller size tone hole in the bell? Will the pitch be sharp by a few cents or worse on open tones or could it almost be insignificant? It needs new pads something fierce but yeah, I might be able to get enough notes out and do a test, though in it's present condition, it would not be very "scientific." Like I said, go easy...

I have a 20's Pedler BC with cool Art Deco Engraving on the bell. It was riddled with dents, though. I had great crack repairs done by John Butler JB winds in Sugarland TX. JBWinds.com - Instrument Restoration

I sent him the bell and he had a friend take out the dings, it looks perfect, I am amazed. I think it was $25.00. The shipping cost more than the repair. Not sure if he can repair the peg, you can ask. Mojo Bari was kind enough to refer me to John.

My bass clarinet is actually a Thibouville Freres. I'm linking to some photos just in case anyone is interested in the discussion or if it helps clarify the difference in bells. I suppose I just need to get it in playing condition first and then find out how the tuning compares wth the different bells. 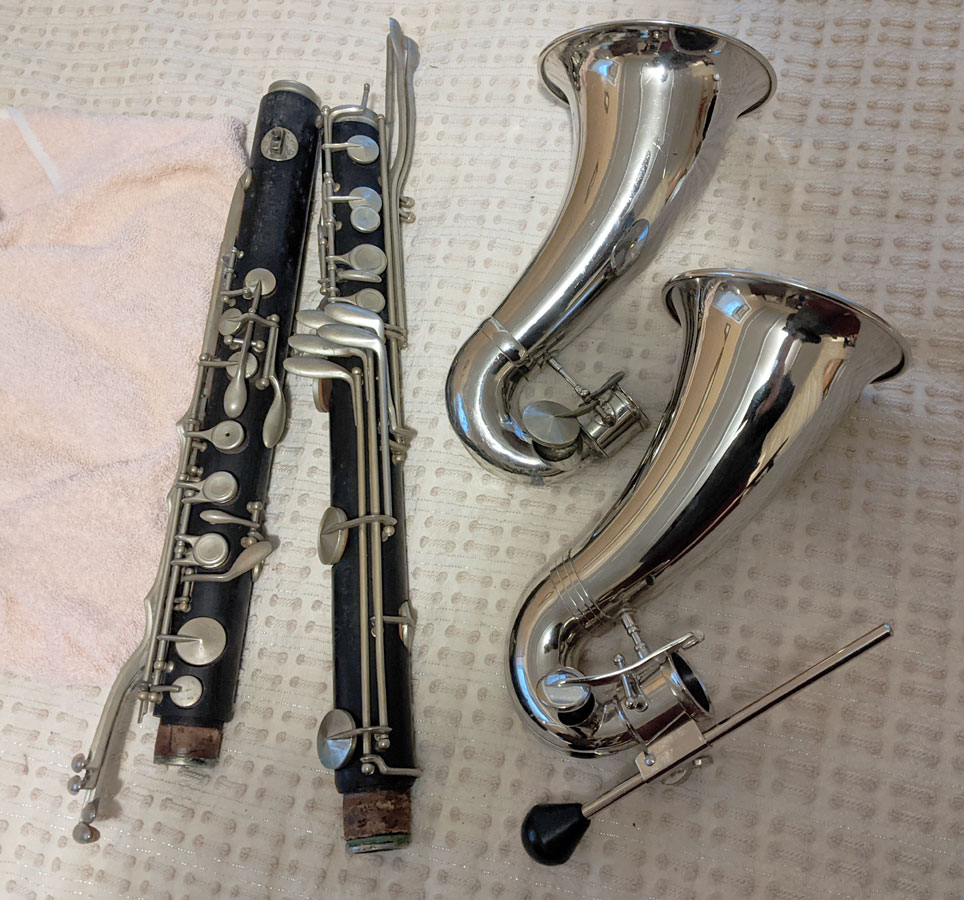 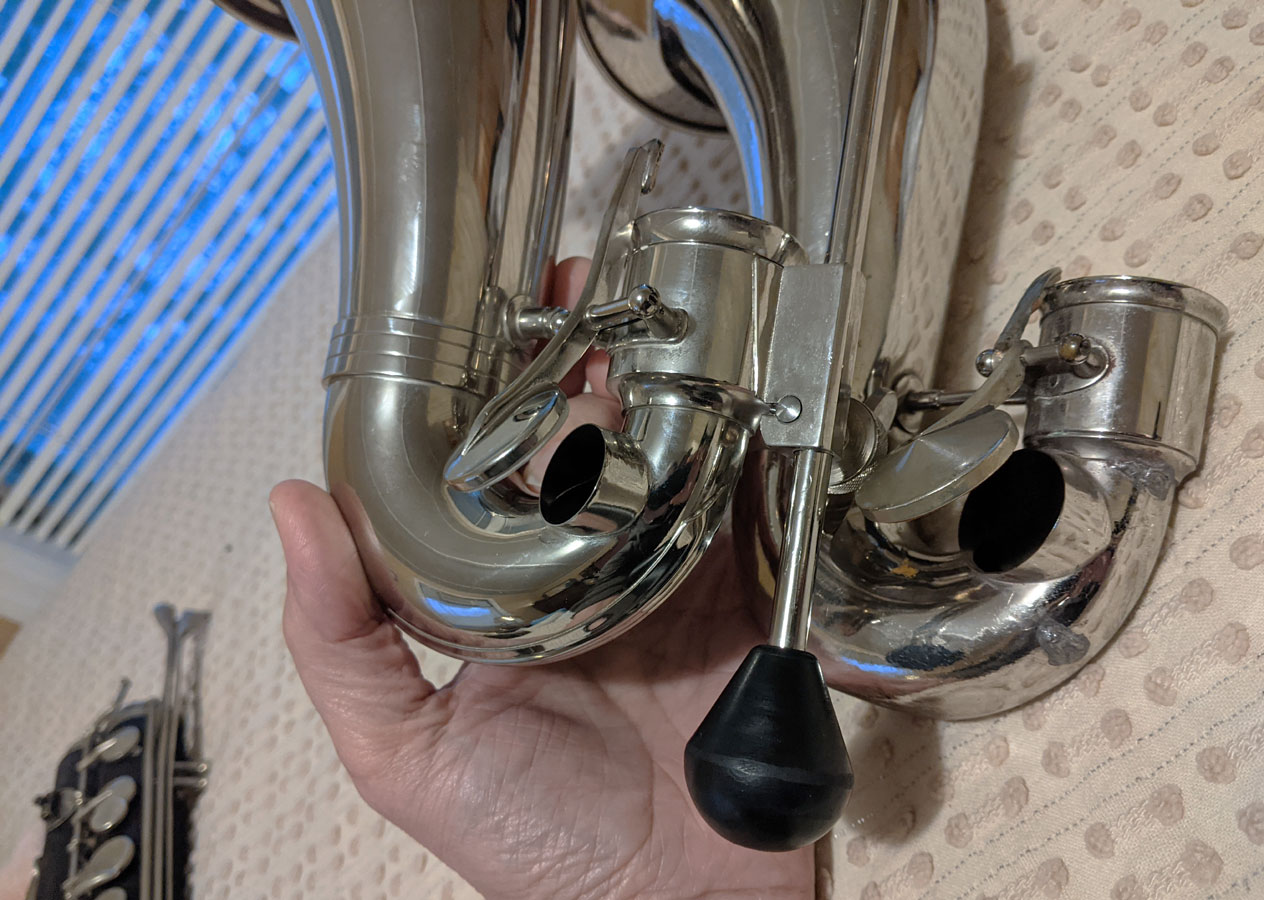 Not sure if the forum is going to allow my photos since I'm new to the forum, but anyway... I've learned my bass clarinet is an Eb and I'm attempting to replace the bell with one for a C. So tuning would be thrown off for all the open fingerings. I just need to repair my old bell. Cheers.

If sharp, you can add putty or cork to the top of the hole. The B/E tone might get small though.
Mojo mouthpieces and refacing at mojomp.com. Email: MojoMouthpieceWork@Yahoo.com

Your pictures were stuck in moderation. I released them.

Mojo said:
If sharp, you can add putty or cork to the top of the hole. The B/E tone might get small though.
Click to expand...

Right... but the new bell I was attempting to replace the older one with has a smaller tone hole which is going to pull all the open notes flat, I do believe. I think I need to repair my older bell... or find a low C bass clarinet to fit the new bell.

It depends more on the hole location than hole size. You need to also pay attension to the distance of the hole to the end of the bell. On a low C bell this distance is longer than on a low Eb designed bell. The distance from the hole to the top of the socket will vary from brand to brand.
Mojo mouthpieces and refacing at mojomp.com. Email: MojoMouthpieceWork@Yahoo.com

Thanks Mojo. I looked back at my digital receipts for the Kessler bell I purchased and it did say it was for a low C bass clarinet. I'm not sure that was mentioned in the sales posting, but regardless, it's not designed for my bass clarinet which is a low Eb. I found a floor peg bracket and peg at ferreestoolsinc.com which I have ordered and will solder onto the old bell. I may keep the low C bell for experiments...

Are bells supposed to be somewhat interchangeable on bass clarinets?

Staff member
Administrator
Not really. Not even within the same manufacturer, sometimes.

EDIT, before someone asks: I'm not an acoustician.
Yes, I'm the Artist Formerly Known as Saxpics.
If you need me or just want to chat, e-mail me @ thesaxinfo-at-gmail.com.
Check out the Bassic Sax + TheSaxInfo Picture Galleries!
Quote of the Day: "It sounds like a psychotic kazoo." - Claude 013

That's what I figured, but I've just seen so many kits like my own where the bell was not original, plus questions like this AND the fact that third party barrels are relatively common among clarinetists.

Staff member
Administrator
I've played Bb soprano, Bb bass, and Bb contrabass (I'll exclude the Eb soprano, as I played one for maybe a couple hours). The thing about a 3rd party barrel is that it might not work very well for you or match the instrument. I consider it like swapping your mouthpiece: you're probably going to have some notes that aren't "right" any more. Practice might make the problems go away. As an example, the intonation standard for most instruments is A=440hz, also known as low pitch. In some orchestras, though, it's A=442hz. When we were discussing this a while back, I broke out my wife's alto sax and an electronic tuner to make sure I was decently in-tune at A=440. I then reset the tuner to A=442hz. It was possible for me to get the horn in tune, but it was difficult. Buffet also had a saxophone model called the S1. It came in an A=440hz version and an A=442hz version. The difference between the two was the neck.

Regarding seeing bass clarinets with different bells, I'll again refer to my comment and other folks' comments that it might work, but it might not. I can think of one really good reason to have a replacement bell, though: it's a former high school instrument. Oh, the instruments I've seen that were treated with such disrespect!
Yes, I'm the Artist Formerly Known as Saxpics.
If you need me or just want to chat, e-mail me @ thesaxinfo-at-gmail.com.
Check out the Bassic Sax + TheSaxInfo Picture Galleries!
Quote of the Day: "It sounds like a psychotic kazoo." - Claude 013

From a ROI point of view, most of these older BC's, like their Soprano cousins, will not be worth the cost of the purchase, plus overhaul and bell work, at re-sale. I wouldn't anticipate being able to recover my investment on the Pedler 100% if I sold it, but I 've got a nice playing BC for less than $1K. I think the exception would be Selmers and Buffets.

The existing bell has to be altered? How does this work, who would purchase this? $2,599.00 for a wood carving?

Bari Sax Guy! said:
From a ROI point of view, most of these older BC's, like their Soprano cousins, will not be worth the cost of the purchase, plus overhaul and bell work, at re-sale. I wouldn't anticipate being able to recover my investment on the Pedler 100% if I sold it, but I've got a nice playing BC for less than $1K. I think the exception would be Selmers and Buffets.
Click to expand...

I think you've got the point: if all you're caring about is a bass clarinet (when I see "BC," I think "Buffet-Crampon") that works like new and is about half the price of a new, decent student horn (a YCL-221 is $2211), go for it. The exceptions are professional bass clarinets from Buffet or Selmer and horns that are just a couple years old. At least, browsing through closed ebay ads implies this. You shouldn't worry about how much it'll sell for in 3 to 5 years.

Regarding the Backun bass clarinet bells: . This was before the performer upgraded to a much newer Selmer.
Yes, I'm the Artist Formerly Known as Saxpics.
If you need me or just want to chat, e-mail me @ thesaxinfo-at-gmail.com.
Check out the Bassic Sax + TheSaxInfo Picture Galleries!
Quote of the Day: "It sounds like a psychotic kazoo." - Claude 013

Here's a nice Pedler BC up for sale, the bell appears to be in great shape, as does the case:

The seller listed it as a 50-60's BC, probably not woodwind people!