Another year, another season ...

Staff member
Administrator
We kicked off this season a month late because of canceled gigs due to the snow and such. But what a fab gig we had this weekend. Dancers, singers, soloists, and so much more! I luvs my music peeps! 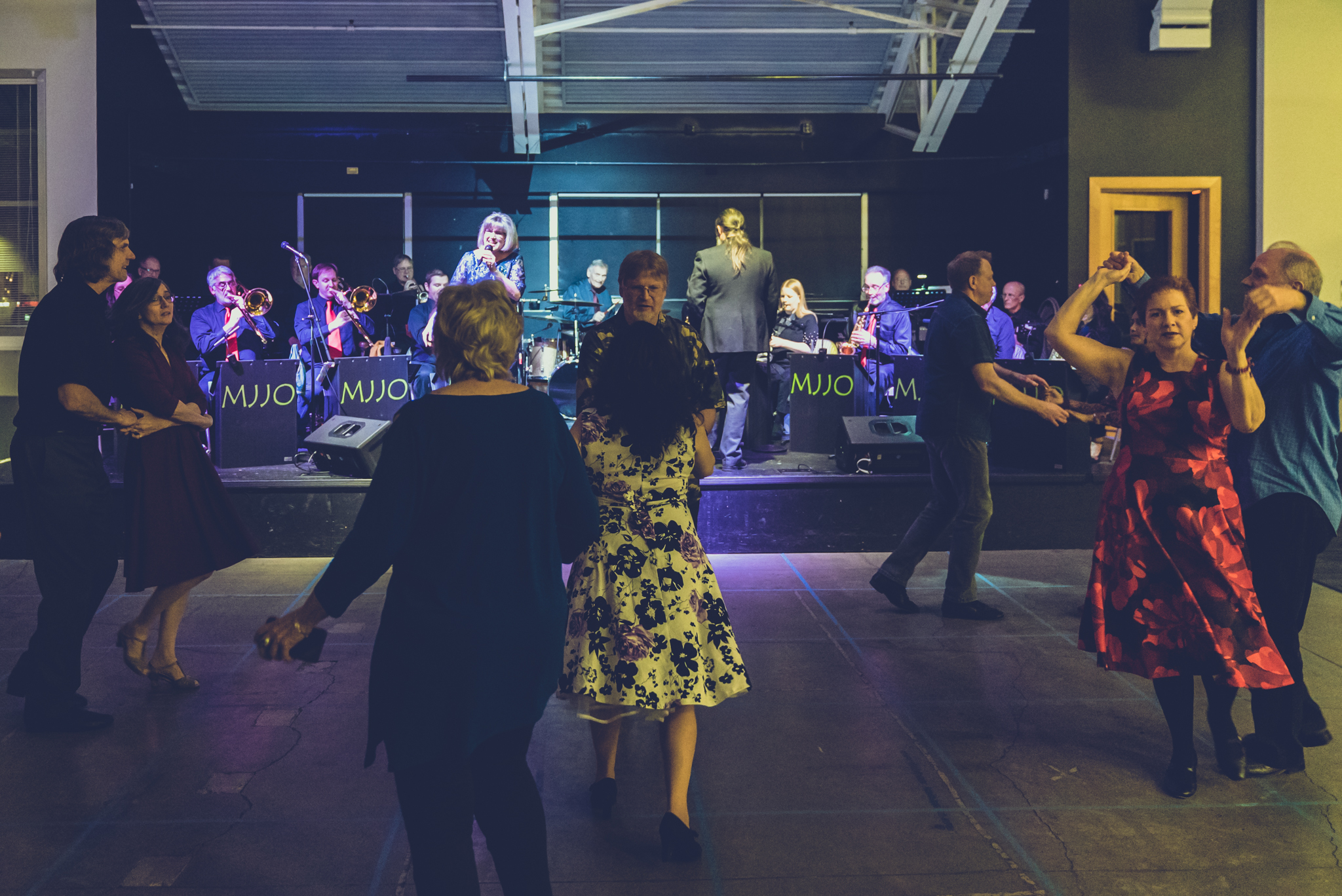 You must live 'up north'.

Our season in South Florida is coming to a close, it dies on Easter and they bury it on Mothers' Day.

I do hope your season is both tons of fun and profitable.

Staff member
Administrator
Well, I'm not a serious pro like you. My big band does 10 to 12 gigs a year and takes Dec off. I know, potentially the busiest month of the year. And 4 to 5 of those gigs are for charity events, creating money for children programs. My sax quartet does two to three gigs a year during the summer. But I do have a new 10 piece that with a little help from a pro I hope to make some serious change for my fellow musicians. We'll see ...
Seattle Solid GOLD ~ Quinn the Eskimo Vintage Horns

Good luck with the new 10 piece.

I've been in bigger bands, but downsized to the duo in 1985 because of the problems associated with other musicians. The more people, the more potential problems.

At that time I was in a 5 piece with the woman who is now my wife and in my avatar, and a few others. We lost the bass player, it took two months of unemployment to get a new one worked in. As a working pro, I keep 3 months of living expenses in the bank at all times for these situations.

I hadn't gotten the bank account fully restored when we lost our drummer. Working in drummers is easier as they don't have notes to memorize as well. We found a gal with a small set, she kept great time, played tasty, supported the songs but never got in the way, and even sang backup vocals. We were out a month, got our first gig in a country club we had done a lot of previous business with. The place was packed (aren't fans great!) and the folded the accordion wall between the dining room and the lounge and asked us to set up there. The drummer said, "God will never forgive me if I play in a bar." I answered, "God will have to forgive me for homicide if you DON'T play in this bar tonight." She played.

Where did she expect to play? I found out she was a Seventh Day Adventist and drinking was a no-no. Well none of us drank on the job no matter where we played.

The next day I bough a Teac 4 track reel-to-reel tape deck and started doing my own backing tracks. I play drums, bass, guitar, and at the time one-handed piano, so I was able to do it. I mixed to cassettes and took them to the gig. I found that 2 people could make almost as much as 5 and doing the math means we were making much more money.

Later came a primitive sequencer, then a better sequencer, and in 2002 an IBM ThinkPad computer, first as a sequence player, but when I got too many sound modules, I started recording everything and converting to 192kbps mp3 files. We've worked without personnel problems ever since we went duo in 1985.

I've been a pro since 1964 and I've been in big and little bands. I've even been in the opening act for major headliners. At this point in my life, I don't see me getting into a big band again. Of course, if Leilani decides to divorce me, I might have to, but we get along so well there isn't much chance of that.

Staff member
Administrator
The stories I hear from pros make me glad I had a day job. And there seems to be a lot of bitterness out there too.
Seattle Solid GOLD ~ Quinn the Eskimo Vintage Horns

I had 2 day jobs, testing out what it is to be 'normal'. I also had electronics in school, so I repaired telephones and I was a Cable TV Field Engineer. Each day job lasted a few years while still gigging on the weekends.

I found out for me, normal is soooooooooo overrated. I bad day playing music is better than a good day at any day job I can imagine.

My first gig was when I was in Junior high school. I was in school band and after hours in a little rock band. We were terrible (everybody was back then). We got a gig playing for a junior high school dance. There I was on the stage, with my very best friends, playing the music we worked so hard to learn, and much to my surprise, that cute girl who wouldn't even acknowledge my existence in English class was 'making eyes' at me! And at the end of the evening, they actually paid me for that experience!!!!!!!!!

I went on the road after school, played in singles bars, mostly college towns all over the eastern 2/3 of the lower 48 US states. Partied a lot of beautiful women, had a lot of fun on stage, and saw a quite a bit of the country. Eventually we were the opening act in concert for the hit-makers of the day, The Four Seasons, The Association, The Kingsmen, etc., and eventually Motown. Here I was being treated as an equal peer by some of the most famous musicians on the planet.

The Motown recording deal fell through because Motown wanted to pay us only $0.02/record, and out of that came inflated recording, distribution, and promotion costs. Our manager figured we'd have to sell a million copies of our first LP to end up not owing Motown money. They picked their second choice to be the first white band on the Motown family of labels, The Sunliners. Of course, Motown has to own the band's name so they have complete control andthe Sunliners changed it to Rare Earth.

That's whey I tried my first day gig. But the lure of the stage got me back into music. (I actually feel better about myself as a musician than I did as an engineer.)

Since then I've played singles bars, show clubs, 5 star hotels, cruise ships, eventually slowly downsizing to my present duo that I formed with a band-mate (who is now my wife) when the last real 'band' had problems.

Sine then we've worked steadily, smaller venues, (yacht clubs, country clubs, retirement developments, private parties, etc.) not as much glory but more money per gig. And since I have the best woman with me, I don't need to chase skirts anymore. We've had people who vacation here in places from Canada to Australia invite us to their homes and we've taken one in Australia up on that for two nights.

I'm past retirement age, and I have no plans to do so. Being a musician is what I am, not what I do. I can't imagine a live without gigging. It's the most fun I can have with my clothes on.

I probably would have made more money if I kept the CATV Engineering job, but I wouldn't have had such a happy life so far. I'm not rich, and I budget money, but my house is paid off, I've vacationed From Alaska to Costa Rica, from England to China plus North Africa, Australia and The Caribbean. I buy new cars (dodge class, not benz) but drive them until the become undependable (usually over 200k miles).

And I'm living my life on my own terms, not answering to some middle manager in a faceless corporation. I'm making my own decisions, and either profiting by them or learning by them.

I am glad I am making a life doing music and nothing but music.

Our summer season of 7 concerts and one parade (July 4) kicks off June 27. It is the 50th Anniversary (51st season) of the Westchester Band. Been 10 months since the last time I played last August, so it's time to gear up the trailer again for the trip from Nova Scotia to Scarsdale, New York. Will be my 34th year in this group.
The Most Advanced Clarinet Book tomheimer.ampbk.com/
austinmacauley.com/author/heimer-tom
(for PDF samples click on book image then on PDF)

Staff member
Administrator
My wife and I are with the Lynnwood Community Band now as they practice earlier and are closer. Their second concert is coming up this Friday and we are playing some rather easy charts with the exception of Silverado. Good times.

The band I play in are working on Silverado. Personally I find it hard going, but it's slowly getting there. It's on our concert program in 3 weeks.
Tony F.

Staff member
Administrator
Hard but so melodic, it makes it easier for me when I find I love the line. And easier to remember the next time I do it. Silverado was our stretch goal. Next comes Arabesque by Hazo.
I hope to get the band to do Strange Humors by John Mackey. We can only do one really hard chart a concert because it is a long pull for this ensemble.
Seattle Solid GOLD ~ Quinn the Eskimo Vintage Horns

Staff member
Administrator
The director selected Hazo's Arabesque for our Spring concert. He saved it for when our best flute soloist returns from break. I hope the Lynnwood Community Band can do it, it will be challenging.
Seattle Solid GOLD ~ Quinn the Eskimo Vintage Horns
You must log in or register to reply here.
Share:
Reddit Pinterest Tumblr WhatsApp Email Link
Top Bottom