Going Digital (Tablet) for all your music - One Band's Recommendation

Staff member
Administrator
Since the Seattle Solid GOLD org digitalized our music, here's what we recommended this year for the GOLD big band for software, tablet stand, and pedal. Thought y'all might find it helpful/interesting. I use my tablet in four bands/ensembles and love not having to schlep the big binders around.

I've been hearing quite a bit of side chatter about going digital with the Seattle Solid Gold music library. So, I thought I would start this thread for people to share their experiences and their preferences for their digital music solutions. I'll give it a start and encourage others to pile on with your opinion.

Software and Hardware
Currently there are three different solutions I know of that are being used in the band.

forScore on Apple
By far the most popular option and is used extensively in the Big Band, Hits Band and the Little Swing band. Gary swears by it and has said that forScore is an industry standard.

It provides a rich feature set including
MobileSheets for Windows and Android
If you're cheap (like me) and are looking to leverage an existing or less expensive windows or android device, MobileSheets is an option. I've used this for the last year or so and have found it to be a great option.
MobileSheets also provides a rich feature set similar to forScore.
Platforms supported:
Hardware Options
Apple
For the who would like to use forScore, iPads in the larger format seems to be preferred (~ 12").
Windows
Accessories
Foot Pedal
Tablet Holder

Staff member
Administrator
BTW, I love the Apple Airdrop feature that allows me to share a missing part to anyone with an Apple tablet (who forgot to download their parts). And that feature doesn't require Wifi, it just works! AND I couldn't do it without the half page turn which gives me half a page to find a section of the music with rests or where I only hafta use one hand to play the part the turn the page. I usually tag the perfect spot with a symbol to remind me when I'm playing. 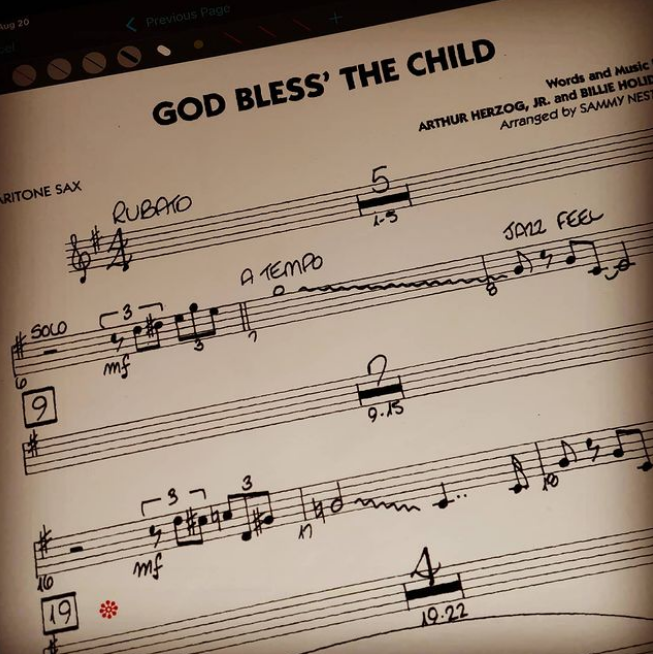 In our duo, which is quite a different situation from a bigger band, I put all my music on my ThinkPad laptop. I use a Delcom footswitch (USB) to turn pages.

I make the score in Encore, which I bought back in the Windows 98SE days (it still works). Then I make a .jpg of the chart. For scores of more than one page I just add -1, -2, -3 or whatever after the name. The footswitch gets me to the next page.

Since I make the scores myself, I can put page breaks in easy parts of the music for a page break and I can arrange them so all the letter parts line up on the left. No searching in the middle of a line for a repeat sign. I customize the charts to make them easier to read while being an entertainer as well as a musician.

I keep Windows File Explorer open with the songs listed in alphabetical order. To find a song I just type the first few letters of the song, when the song is highlighted, hit Enter and the first page opens. ALT+F4 closes the chart.

I use nothing but ThinkPad computers on stage, because they are almost bullet-proof. I still have a 2002 XP ThinkPad running. Since I keep a spare up and running at all times (the show must go on) I used to have two 2002 ThinkPads, but I dropped one and broke the hinge. It still works, but replacing the computer was less expensive than replacing a hinge for a computer that was over a decade old when I dropped it. I replaced it years ago with a Win7 computer.

The music is in landscape mode instead of portrait, but for my uses, that's not a problem.

We have over 600 songs http://www.s-cats.com and the ones we play most often are memorized. Others only need a glance or two for a refresher, but some that we don't play often finds the corner of my eye buried in the chart.

If it's a song I'm singing, the words are up (in .jpg as well) instead of a chart. If I'm playing guitar while I'm singing, I'll add the chords.

I also make my own backing tracks (I play bass, drums guitar, sax, flute, windsynth, and some keyboard) so although I can do charts and mp3 files on the same computer, I put each on a different computer, But all the data is on both computers. That way, if something breaks, the show goes on immediately.

Since 2002, that has happened 3 times (not bad for a guy who makes his living doing one-nighters). Switch to the other computer to do both tasks, and the audience doesn't know anything went wrong.

I've used Apple gear in the past, but when I started writing aftermarket styles for BiaB I settled on Windows. The StyleMaker app works better and has more features on Windows, so I can make better styles that play on both Win and Mac formats. I'm not a fanboy of either OS, I let the software I need to use dictate which platform I run.

Well, that works for me and has been working for almost 20 years, so I see no reason to switch to a tablet. Having the keyboard allows me to switch to any of my +600 songs in a couple of seconds.