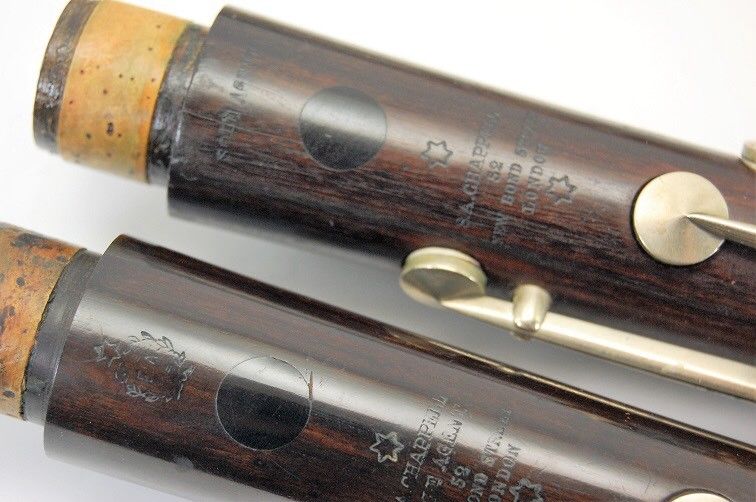 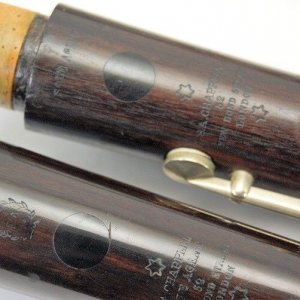 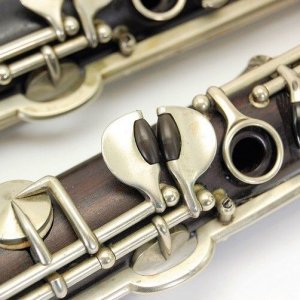 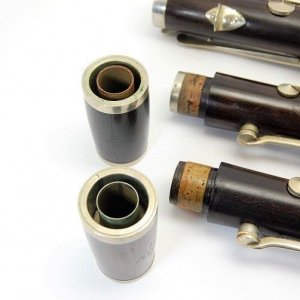 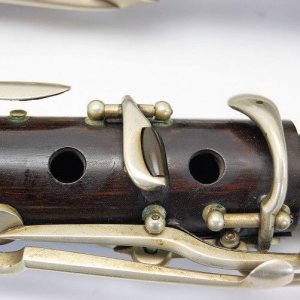 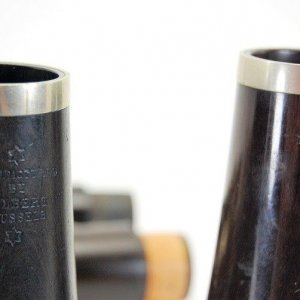 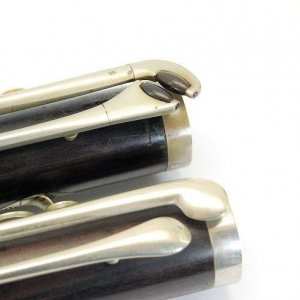 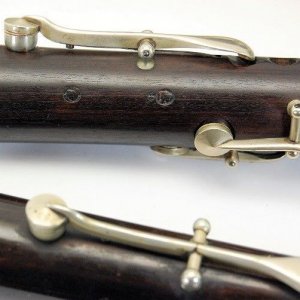 From the ad:
Good general condition to be restored, all screws are free and only has two visible cracks in one barrel.

The tenons are original, metallic with double walls, and the twelfth [octave] key seems to have been modified, originally it should be a wrap key that was turned and closed in front, now the key has the most common shape closing behind.

The case is in poor condition and it appears not original. Comes with a mouthpiece, lig and cap, the mpc is branded:

Comments from me:
* Boosey did contract Henry Lazarus for assistance when they wanted to start producing clarinets, so while it's not original, it is kinda cool.
* This is definitely a late 19th century horn, pre-1895. We have a thread regarding another E Albert horn at https://woodwindforum.com/forum/index.php?threads/eugene-albert-clarinet.25910. There's also a horn in the Edinburgh museum, built around 1877, that has the same "brevete" ("patented") marking on the low key cups. I'd expect the horn I have pictured here to be approximately the same age.
Last edited: Oct 25, 2018
Yes, I'm the Artist Formerly Known as Saxpics.
If you need me or just want to chat, e-mail me @ thesaxinfo-at-gmail.com.
Check out the Bassic Sax + TheSaxInfo Picture Galleries!
Quote of the Day: "It sounds like a psychotic kazoo." - Claude 013
I noticed this pair on ebay when I searched for Albert before I bought my $100 one-that relocating of the register vent strikes me as rather odd-I get doing it for the one that cracked along the post and the register pip spot, but doing it for both seems a tad weird-is there any actual acoustical benefit to either position?
Only argument I've heard for or against either is that the wraparound helps with condensation in the register pip, but also is more difficult to get sealing, as it's at a bit of an angle.
(also in other news there is a very good chance I will be getting a set of some FREE clarinets soon, so let's see how that ends up next month when I see my tech...4 of them, complete with some cracks and wear from many decades of use.)